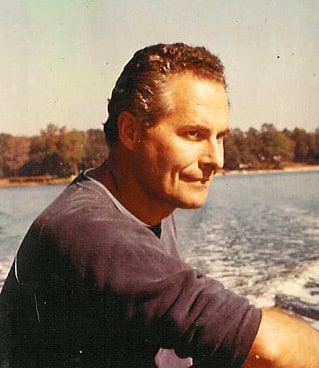 Warren was born in Sacramento, California. After a difficult early childhood, he was raised by a wonderful French stepmother. She loved him as if he were her own and Warren gave her much credit for his life. Warren spent most of his early years on ranches in Northern California - often with just his stepmother as his father frequently traveled in his work. He would always talk of one of those ranches with love and longing. He was an explorer from his early years - he would walk for miles and miles, always with his pack of dogs. This is where he learned to love nature and animals. He attended a one-room schoolhouse and graduated from Dunsmuir High School at the age of 16. In 1997 he attended his 50th high school reunion.

At the age of 17 Warren enlisted in the U.S. Navy and trained as an Electronic Technician. His ship, the USS Gurke DD-783, patrolled the waters off Asia during the Korean War. While on ship he discovered his love of poetry and wrote many poems - his last poem was "IT IS TIME." He received a Bachelor of Arts and later a Masters in Electrical Engineering while working at the Naval Air Development Center in Pennsylvania.

His favorite music was by Brahms, especially the Third Symphony and Third Movement. He could listen to any classical music and tell who the composer, the conductor, the symphony and the movement was. He also loved the Limelight's -- I still remember him singing one of their songs in his wonderful deep voice in a pub in Ireland.

Warren's career took him to Denmark, Belgium, Holland, Luxemburg, Italy, England and Libya, besides the U.S. He worked as a scientist, an electrical engineer, a technical writer, a Systems Analyst, a field engineer and a consultant -- his skills were very versatile. He worked: for the Canadian Navy and lived in Ottawa, Ontario and Belfast, Ireland; for the U.S. Air Force in Ankara, Turkey and Betsburg, Germany; and as an ionospheric physics scientist at McMurdo Station, Antarctica during the winter of 1966 and had a glacier named after him by the US-ACAN (the Advisory Committee on Antarctic Names).

He was fascinated by astronomy, space exploration, science fiction and any type of science. Warren was a walking encyclopedia and an avid reader. He had a brilliant memory and knew a little about everything. He brought a unique perspective into our lives and whatever sparked his interest, he became passionate about it. His mission seemed to be that of searching for meaning. He became interested in flying while working at Boeing Co., in Wichita, Kansas. Flying became a hobby to relieve stress.

In February 1967 Warren married Luella Walker. They fell in love while on a ski trip in California. His friend Art was his best man and the last friend who made him laugh before he died.

The pride of his life was his son Ed. When Ed worked for AOL Europe and lived in Ireland, Warren loved to visit. Warren had such pride in Ed's accomplishments, but above all wanted him to be happy.

During the hurricanes of 2004 in Florida Warren kept his neighbors calm by sharing his generator and food. He played poker with them all night while the wind raged and roared, and kept them calm. I was told they "were so blessed to have him as a neighbor and could not have survived that week without him." "Love and good works were his commandment and religion."

He loved to write and traveled the Oregon Trail to do research for a historical novel set in California during the mid-1880's: He was working on this project before he became sick. Returning home from Lisbon, Portugal in November 2005 he started to feel ill. Warren was diagnosed with cancer of the biliary tract for which there is little research and no symptoms till the end stages. Warren was very brave, but this disease pounced upon him and he died at the home of his son three months after returning from Lisbon. His final request for his tombstone was as follows: "A glorious life because of a gifted and devoted wife and a brilliant and loving son who provided my moral compass."

I see the golden fields full of promise with bright futures and happiness
As I take in the beauty and contemplate the joys to come, a tiny dark
Cloud appears on the horizon and as it approaches I feel twinges of
Doubt and then I feel my body being assaulted with pain and doubt,
And a small voice within the cloud calls out softly "IT IS TIME."

-- Part of the last poem by Warren

Warren's last thoughts were of his wife of 38 years and of his son Ed, whom he loved so and was so proud of. Warren will continue his life in the thoughts and deeds of those he loved. He shall never be forgotten. He belongs in the galaxy as our shinning star; and as we will look to the heavens we shall remember him and this will keep us going. Loved and sadly missed by his wife, his son, his sister, nieces, in-laws and friends.

The Wife of Frazer "Warren" Clausnitzer

"I can still hear Uncle Warren's wonderful deep voice calling Aunt Luella, 'Honeybun.' I miss him and will always love him."

"My talented brother Warren, who loved to travel, is taking the ultimate trip of his too short life ‹ into outer space. GODSPEED."
- Your Sister, Joyce

"Remember working with you and the good times. Enjoy your ride through space and I hope our paths cross again."
- Arthur Von Ploennies - friend/ coworker at North American and Boeing

"Warren will be sadly missed by the Walker family ‹ he will always be in our hearts. Will always remember your love of rhubarb pies."
- Ken/Nancy Walker (brother/sister in law) Alberta, Canada

"Remember the sweatshirt you gave me, 'Operation Deep Freeze.' I kept it for many years. My son wore it out ‹ he thought it 'cool.' "
- Diana Rubin - niece