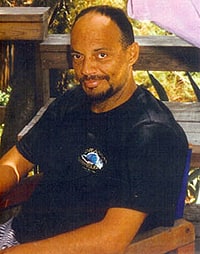 Jesse James Scroggins was born January 17, 1959. He was the son of Jean and Jesse James Scroggins, who both predeceased him. He was the middle child to oldest sister, Jeannine, and younger brother, John, and beloved cousin of Monica Boseman. He was the nephew of Aunt Cordie & Aunt Nita, who have both passed on since he has left us. He grew up in the agricultural culture of Coachella Valley, California. He lived all over Los Angeles and its many surrounding communities.

Jesse James worked in a variety of different places and jobs, as a waiter, a floral designer, a costume designer and a multimedia artist among many. He loved life, the full expression of, and the adventure of living it. He liked to travel, explore and spend time with his many friends around the country. He was best friends to Tim Ryan, Judi Baker, John Garbarino and Roxanne Baird among many many valued loved and loving friends who are too numerous to mention individually here. He was well loved by us all because of his kind, gentle and non-judgmental nature. He was even-keeled in a world of much emotional disruption and chaos. The world was a much better place with him in it, because of his presence. He crossed lines of race, creed and culture. He brought many different peoples together in cooperation and friendship.

Halloween was his favorite holiday. He loved the costumes, drama and intrigue, and he rarely missed being on Santa Monica Boulevard every year to enjoy all the pageantry and joie de vivre. He was gay and proud of it. He marched when he could in devotion to his life and this cause. He was forever grateful to APLA (AIDs Project Los Angeles) and Out of the Closet for their kind assistance in providing many of his needs during the last part of his amazing life.

Jesse would be flabbergasted and delighted to know his ashes are being shot into space by the good will and largesse of his good friend, Z Spiegel. "Jesse was a man of fearless courage, and humble dignity in the face of extraordinary adversity. He was a true inspiration to everyone who was blessed to know him. At a time when my life was bleak, dark, and empty, Jesse showed me the path back to Light. I honor his memory, and celebrate the life of this great and gentle man who was my friend."

Monica Boseman has sent this perfect poem to include:

Ever Close in Mind and Heart - for Jesse

No further away than a picture,
A smile or remembered phrase,
Our loved ones
live in memory--
So close in so many ways.
For how often does a sunset
Bring nostalgic thoughts to mind
Of moments that
our loved ones shared
In days now left behind!
How often has a flower
Or a crystal autumn sky
Brought golden recollections
Of happy days gone by!
Yes, memory has a magic way
Of keeping loved ones near--
Ever close in mind and heart
Are the ones we hold most dear.

You are a creature of light.
From light have you come,
to light shall you go,
and surrounding you through every step
is the light of your infinite being.

Tim Ryan says, "I don't have too much to say other than he was a brave, kind spirit who shared his pain, joy and dear friendship with me and others with a great sense of artistic flair and I was proud to know him."

We all echo this sentiment.
It was a privilege and honor to know Jesse James.